To address current high COVID-19 transmission rates, the U.S. Centers for Disease Control and Prevention states in a “Summary of Guidance” published Dec. 4, “Because of ... the disproportionate impact that school closures can have on those with the least economic means, kindergarten through grade 12 schools should be the last settings to close after all other mitigation measures have been employed and the first to reopen when they can do so safely.”

The teachers union in East Lansing has a different view, however. It posted a meme on a Facebook page claiming it is immoral to want to keep schools open during the coronavirus pandemic.

“Parents need to give up the fantasy that their kids making incredible academic progress this year is more important than people dying,” the meme stated. “This is opportunity hoarding & a vision that your own kid deserves to excel academically right now more than others deserve to live, have housing, eat. It’s immoral and ignores the fact that we live in community with others.” The East Lansing Education Association then removed the message posted with an explanation:

“A meme was posted earlier this week that has caused a good deal of controversy,” the explanation stated. “As it does not reflect the sentiment of the membership of the ELEA as a whole, it has since been removed and the issue has been addressed.”

Michigan Capitol Confidential reported earlier that the Journal of the American Medical Association published a report in November showing that school closures in the U.S. may be leading to a decrease in children’s life expectancy. 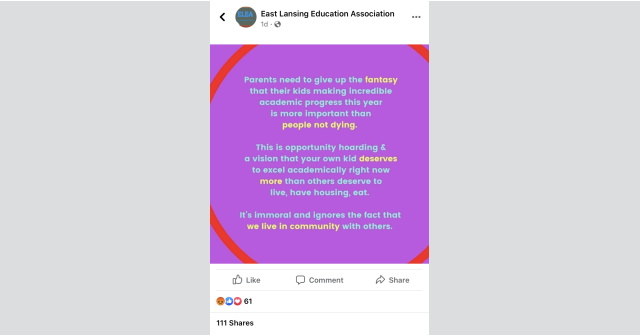