Public charter schools in Michigan are closing the performance gap with conventional district schools in some subjects, according to recently released results from a national assessment test that was given last year. This is happening even though students at charter schools are more likely than their peers in conventional public schools to come from a low-income household.

For both fourth-grade reading and math, the scores of charter students have stayed the same or improved in every assessment since 2009. At the same time, the scores of students at conventional public schools have remained roughly the same.

Eighth-grade reading and math scores for charter students has risen since 2009, with math scores improving from 251 to 272 by 2017. Reading scores have improved from 244 in 2009 to 259 in 2017. The scores of conventional public school students have largely been static since 2009.

The NAEP, which is administered by the U.S. Department of Education, tests students in select grade levels in arts, civics, math, reading, technology and engineering literacy, U.S. history and vocabulary.

While the NAEP tracks socioeconomic data, it does not weight test scores based upon a student’s socioeconomic background. In Michigan, nearly 75 percent of charter school students are eligible for a free or reduced lunch, while 48 percent of traditional public school students are eligible for the subsidy, according to data from the Michigan Department of Education.

Ben DeGrow, the education policy analyst at the Mackinac Center for Public Policy, said he believes the new test results disprove claims that charter schools are failing students in the state.

“Those who want to blame charter schools for Michigan’s academic woes have the story exactly backwards,” DeGrow said. “The evidence keeps mounting that the charter sector is taking great strides forward to help students learn more.”

William DiSessa, a spokesperson at the Michigan Department of Education, told Michigan Capitol Confidential that the most recent NAEP results show that traditional public schools in the state have room to improve.

“While Michigan’s NAEP scores have ticked-up slightly and we’ve gone up in the state rankings, we know there is a lot more work to do,” DiSessa said in an email. “Michigan is not yet where it needs to be. There is a Top 10 in 10 plan, we need to stick with it, and give our students and educators the opportunity to keep improving.”

DiSessa declined to comment on the improved scores for public charter schools.

Dan Quisenberry, the president of the Michigan Association of Public School Academies, said in a statement that he believes the latest NAEP results show positive results by charter schools.

“The NAEP scores are further confirmation that Michigan’s charter schools are certainly moving in the right direction when it comes to student achievement, particularly in fourth-grade reading and math," Quisenberry said. "This is an important scoreboard, and it confirms what other data sets have shown — that charter schools are leading the way.” 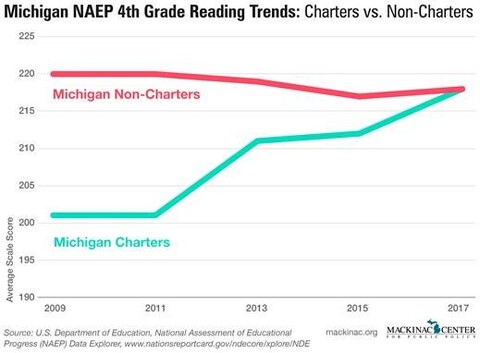 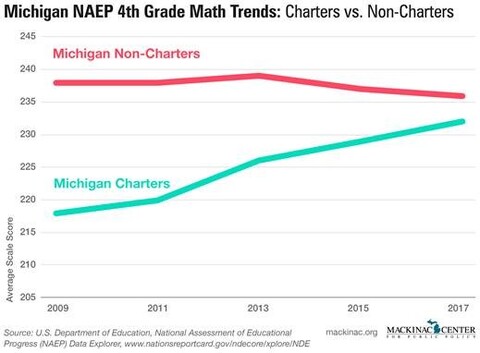