The total number of Michigan residents receiving either food stamps or Medicaid assistance increased by over a half-million people between February 2009 and February 2018. While there was a modest decline in the number of food stamp recipients, it was swamped by much larger increases in the number collecting Medicaid benefits.

The increase occurred even as Michigan was rebounding from sharp job losses during the 2000s and total employment hit a low of 3.9 million in 2010. Since then, the trend has reversed, with 4.4 million Michigan residents having jobs in 2017, according to the U.S. Bureau of Labor Statistics.

The rise in the number of people getting medical welfare has been largely driven by the Obamacare Medicaid expansion championed by Gov. Rick Snyder and Republican legislative leaders in 2013. 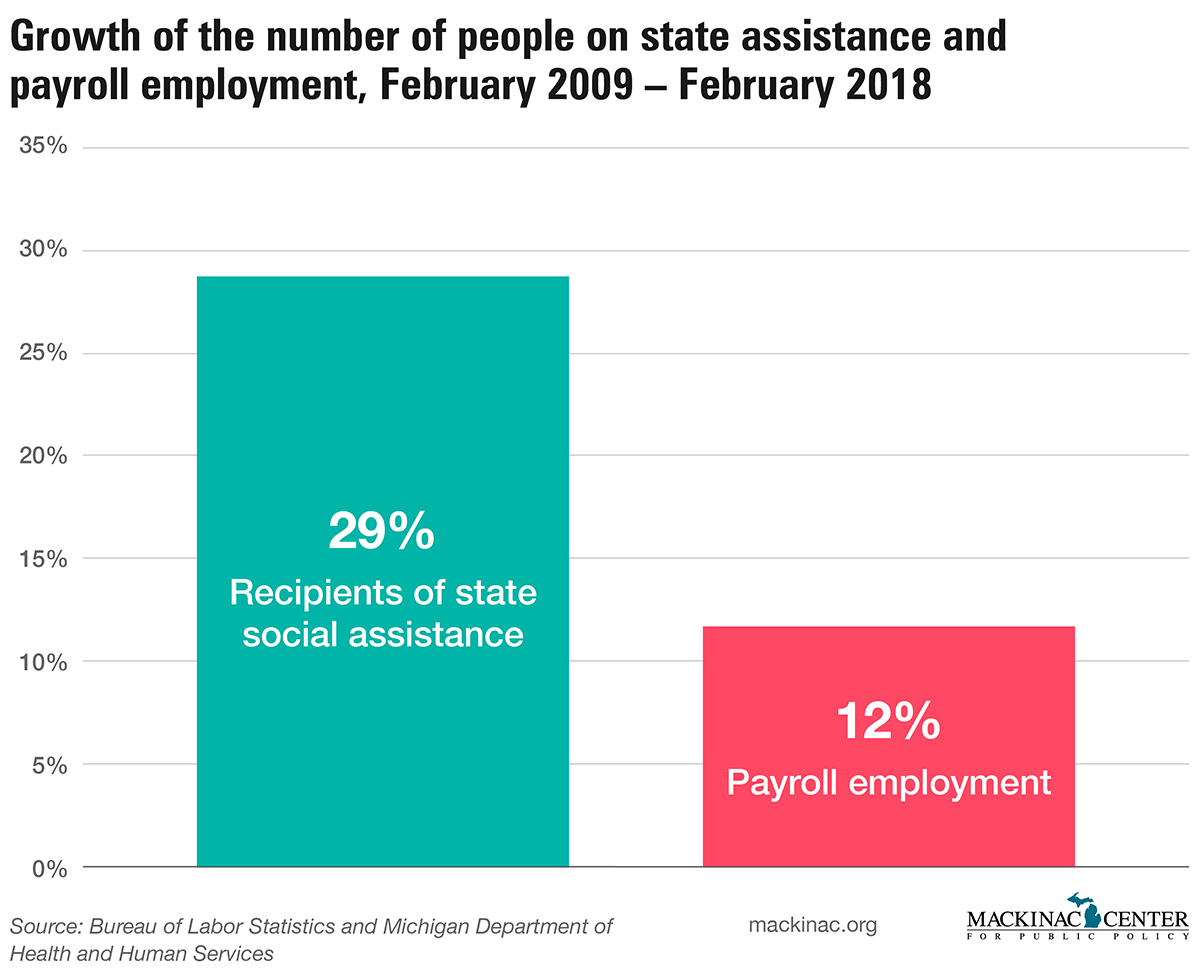 As of February, there were 116,981 more residents enrolled in what might be called “traditional Medicaid” — the pre-Obamacare version — than in February 2009. That enrollment reached its peak in February 2011, when 1.9 million residents were getting benefits.

The number of Michigan residents receiving food stamps, meanwhile, peaked in February 2011 at 1.9 million. In February 2018, the number was down to 1.3 million.

As of that same month, 2.5 million Michigan residents receive either traditional (1.8 million) or expansion (698,733) Medicaid assistance in Michigan, according to numbers provided by Michigan HHS in an email to Michigan Capitol Confidential.

Nicholas Horton, the research director for the Florida-based Foundation for Government Accountability, focuses on Medicaid and welfare reform across the country. He says the increases in enrollment are pushing Michigan’s Medicaid system to a tipping point.

"Since April 2014 alone, the state has enrolled more than 665,000 able-bodied adults in their Obamacare Medicaid expansion, despite promises that enrollment would never exceed 477,000,” Horton said in an email. “We also know that, since expansion began, at least 1,970 individuals on state waiting lists for additional Medicaid services have died.”

Horton continued: “Michigan policymakers need to focus on reigning in this out-of-control program through work requirements, an enrollment freeze, and rooting out fraud. All three of these critical reforms will free up resources for the truly needy and start to put Michigan's Medicaid system back on track.”

In 2013, Michigan state government spent $13.2 billion on Medicaid, and by 2017, that number had increased to $17.6 billion according to the State Budget Office. Michigan’s Medicaid budget comes from a combination of federal and state sources.