State taxpayers are putting more money into the roads than ever before. In inflation-adjusted terms, the $3.6 billion being spent this year is the most in history, or at least since 1940 — as far back as state records allow for making comparisons.

In conducting this research, we wanted to look at just the resources that the state government uses for the roads. So we excluded money from federal, local and private funds, where possible. The state transfers some of its funds to local governments to spend on local roads, and those figures are counted here. But the resources that local governments generate to spend on their own roads from property tax millages are not included.

Finding the historical records on state spending and comparing them with recent data was harder than it may seem. Things in Michigan have changed over time. The Department of State Highways became the Michigan Department of Transportation. Fiscal years ending in June became fiscal years ending in September. Accounting standards changed. Annual reports included different information from year to year.

Because of all these moving parts, we wanted to make sure to cover all the bases. So, we tracked state funding of roads since 1940 with three related, but different measures: annual appropriations passed by the Legislature, year-end state financial reports and state transportation department spending records.

Annual appropriations come in the form of laws passed by the Legislature that give the transportation department the authority to spend money and to transfer money to local governments for transportation purposes. We were able to find these appropriations going back to 1951. We excluded federal or local revenue, where applicable, but the earliest of these documents did not say where the money came from. This omission would overstate the amount of state money spent on the roads in earlier years.

The state issues reports on its annual finances after its fiscal year concludes. Here you can find revenues for the Michigan Transportation Fund, which receives money from the state’s fuel and vehicle registration taxes as well as other state sources. We were able to get MTF revenues going back to 1940.

The Michigan Department of Transportation — formerly the Department of State Highways — publicizes its revenue in annual reports. These reports go back to 1974, and the document for that year also contains a chart showing revenue levels going back to 1952.

We adjusted all three measures to the Consumer Price Index, doing so in a way that took into account the state moving the start of its fiscal year from July 1 to Oct 1. as of 1976.

None of these measures, by themselves, provide perfectly consistent data on state road funding. For instance, the MDOT reports were not in the state library for 1977 or 1979 and were not produced after 1998. As a result, we interpolated these data when needed and projected them into the current fiscal year based on the proportional increase reported by budget authorizations. State budget laws grant authority to spend money, but the state doesn’t always spend the full amount legislators grant it. And the state could spend money on the roads without accounting for it as revenue from the MTF.

Despite these shortcomings, the picture provided by each of these three measures tells a similar story: State road funding is at record levels. 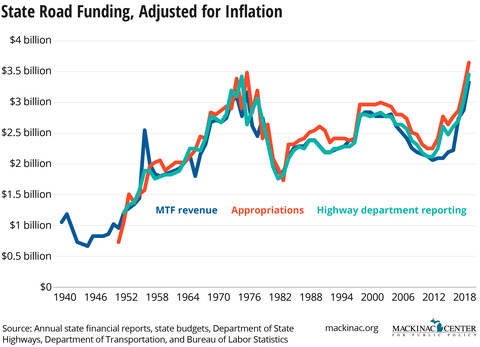 All three measures show steady road funding growth starting in the early ‘50s and lasting to the late ‘70s. Stagflation took its toll after that, and real revenue for roads declined until incremental increases appeared in the second half of the ‘80s and through the ‘90s. Inflation ate into road funding again in the early 2000s, and revenue levels declined during Michigan’s decade-long, one-state recession. But road funding has been on an upsurge since 2012 and now stands at slightly above record levels.

These figures do not include all of the new revenue that might be committed as a result of the 2015 road funding plan. The plan, if implemented in full, would deliver another $336 million for the roads, pushing total state revenue spent on them across the $4 billion line. As lawmakers discuss the governor’s plan to raise taxes by $2.5 billion in order to spend an additional $1.9 billion on the roads, they should be aware that we’re already at record levels of road funding.