Michigan is entering its eighth year as a right-to-work state. Figures show that unions here are feeling the impact, as a declining number of workers in unionized workplaces choose to pay union dues or fees.

According to the U.S. Bureau of Labor Statistics, union membership in Michigan fell to an all-time low in 2019, reaching 13.6% of the workforce. This is down from 16.6% in 2013, the year Michigan’s right-to-work law went into effect. 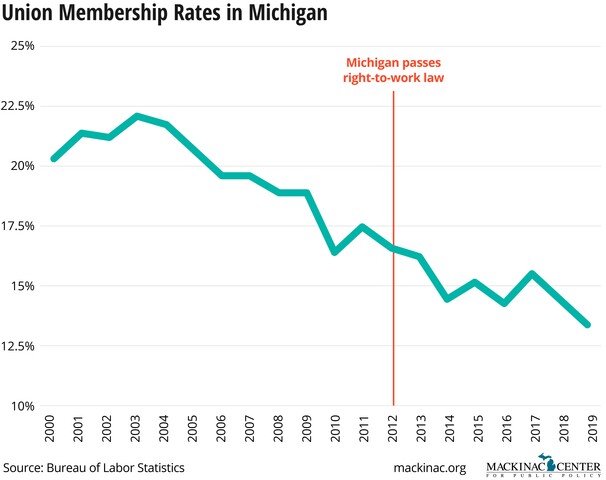 Jarrett Skorup at the Mackinac Center for Public Policy has tracked these figures and says the decline was accelerated by the enactment of this law.

“The number of union workers in Michigan has been declining for decades, but the state’s 2012 right-to-work law has certainly accelerated that drop,” he said. “Most of the state’s largest unions file federal reports and nearly every single one has lost membership — even while the number of workers in Michigan has increased by around 500,000. While a lot of this change is the result of broader economic factors – like fewer auto workers – a substantial amount is more than a hundred thousand people choosing to exercise their freedom and not join a union.”

In 2012, voters strongly rejected a union-backed ballot initiative, Proposal 2, that would have enacted a constitutional amendment prohibiting a right-to-work law. In the wake of this initiative’s defeat, legislators passed a right-to-work bill. Then-Gov. Rick Snyder signed it into law that December.

Under right-to-work, individuals cannot be required to join a union or pay fees to a union as a condition of employment. This outlaws the “union shop,” where nonunion members could be forced to pay an agency fee to the union to obtain or keep a job.

Skorup does not see a bright future for unions in the state, with right-to-work being only one of the factors.

“The decline in unionization will probably continue,” he said, “especially considering the ongoing scandals with the United Auto Workers and diminished power of the Michigan Education Association – the two largest unions in the state.”

According to the Bureau of Labor Statistics, Michigan had 589,000 union members in 2019.