In the months before the COVID-19 pandemic, Michigan’s unemployment rate was similar to the national average. But during an extended lockdown, its rate surged, and it is now among the highest in the country. There are signs of a recovery underway, however.

Michigan’s unemployment rate for the month of May, the most recent statistic available, was 21.2%. That’s the third highest in the nation, behind only Nevada (25.2%) and Hawaii (22.6%). Those two states depend heavily on tourism, a sector among the hardest hit by the pandemic. The national unemployment rate is 13.3%. 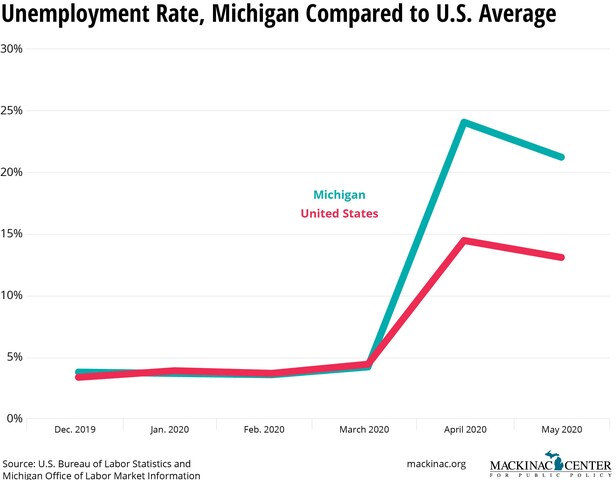 Michigan’s unemployment rate is also significantly higher than that of other Midwestern states. While Illinois is also a top-10 state for unemployment at 15.2%, Ohio is at 13.7%, Indiana is at 12.3% and Wisconsin is at 12.0%. Nearly every state in the nation has improved its jobless rate since reaching a peak in April.

Michigan was one of the states hardest hit by COVID-19, and in turn, it faced a more severe shutdown. Gov. Gretchen Whitmer has extended her emergency powers and authority more than once, resulting in a slower reopening here compared to nearby states.