On Friday, July 10, Michigan Gov. Gretchen Whitmer ordered enhanced enforcement of mask-wearing by Michiganders venturing into public spaces, in an avowed effort to arrest a resurgence of novel coronavirus infections.

The heightened mask requirement is statewide and prohibits business owners from providing service to people not wearing a mask. The new mandate was based, according to Whitmer’s executive order, on the premise that “our progress in suppressing COVID-19 ... appears to have stalled.”

“Over the past two weeks, every region in Michigan has seen an uptick in new cases.”

But a review of data compiled by a University of Michigan website suggests the claim is questionable. 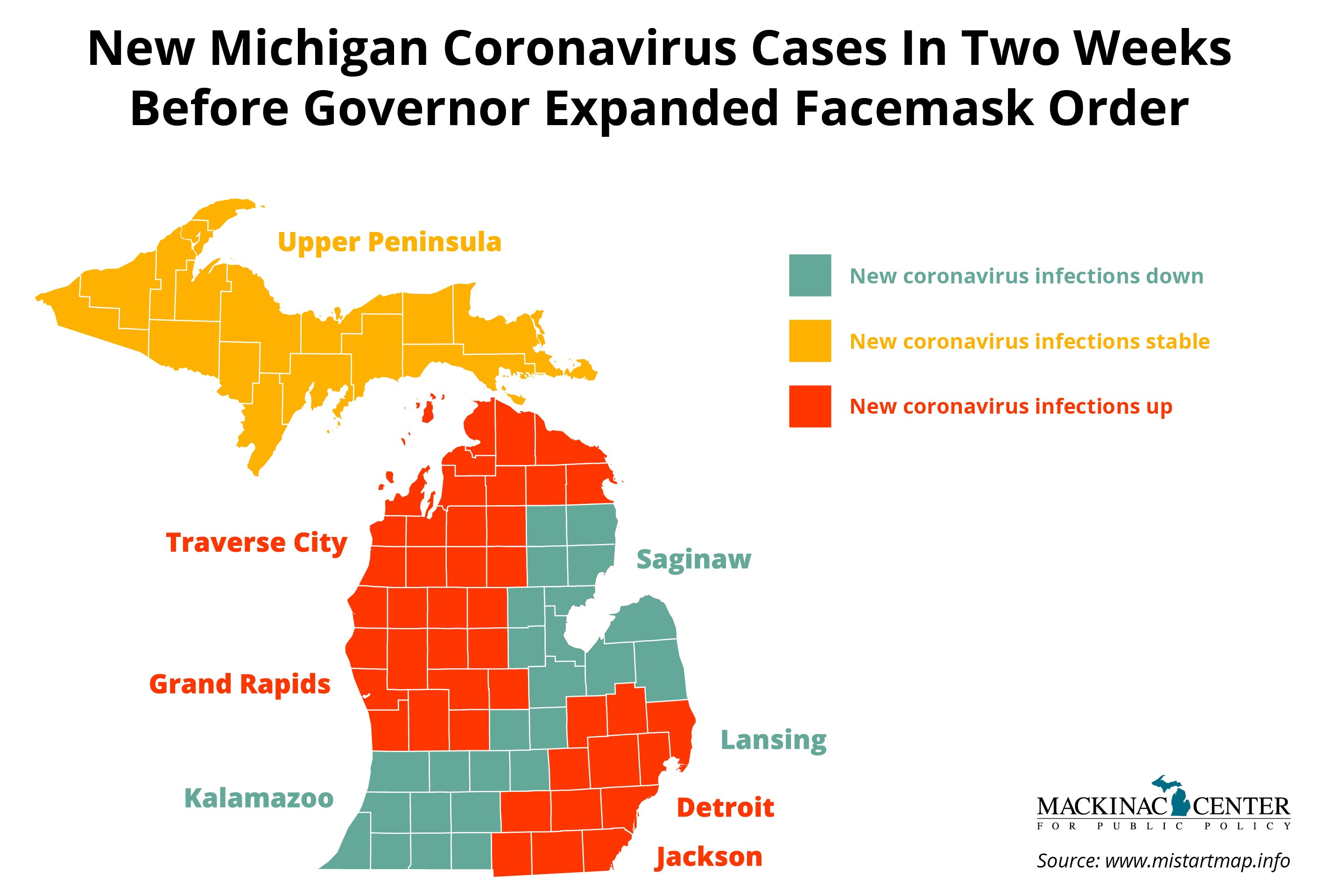 The site mistartmap.info tracks the epidemic in the state. According to it, in the two weeks before the enhanced mask order came out, new coronavirus infections were actually down in three of Michigan’s eight defined regions (Kalamazoo, Lansing and Saginaw).

In all eight regions, reports of new infections were down on July 10 from their peaks during the two-week period of June 24 to July 10.

Michael Van Beek, director of research at the Mackinac Center of Public Policy, said Whitmer’s July 10 mask mandate signaled a departure from her previous policy of tailoring restrictions, and relief therefrom, by region.

“You can certainly make the case that things were going in the right direction in some regions,” he said, “It’s hard to justify why they needed a new, statewide mandate.”

The governor’s office did not respond to a request for comment on the rationale for the heightened mask mandate, even as she extended the coronavirus public health emergency through Aug. 11.

But Tuesday’s announcement continued a pattern of confusing justifications for the governor’s aggressive use of state power to dictate personal and commercial behavior during the pandemic.

The latest executive order, for instance, says, “Over the last three weeks ... our progress in suppressing the pandemic has stalled. Every region has seen an uptick in new cases.”

On Friday, the relevant metric cited in the order was that “over the past two weeks, every region in Michigan has seen an uptick in new cases.”

In the news release accompanying Friday’s announcement, however, Whitmer’s office said, “Over the past week, every region in Michigan has seen an uptick in new cases.”

None of the statements explained why the uptick was being measured over different time periods.

Van Beek said that some level of new infections is inevitable until the virus disappears altogether. It is in the nature of an infectious disease that “we’re going to have some positive new cases indefinitely,” he said. Does that mean masks and emergency declarations also continue without limit, he asked. “Where does it end?”