Among Michigan’s 13 members in the U.S. House, only Rep. Rashida Tlaib, D-Dearborn, voted against a measure to create a committee on U.S.-China competition.

The 365-65 roll-call vote of Jan. 10 created the House Select Committee on the Strategic Competition Between the United States and the Chinese Communist Party.

Tlaib was one of only of 65 representatives, all Democrats, to vote no.

“A Select Committee on China under Republican control will inevitably be racialized,” Tlaib wrote Wednesday. “Decades after Vincent Chin was beaten to death in Detroit, anti-Asian hate crimes have reached unprecedented levels—fueled by Republican rhetoric and led by the former ‘Racist-In-Chief.’”

In a second tweet, Tlaib added: “This committee will be another platform for hateful rhetoric that puts our communities at risk. I voted NO.”

Tlaib was joined in her no vote by two other members of “The Squad,” a group of four progressive female lawmakers first elected in the class of 2018: Alexandria Ocasio-Cortez, D-New York; and Ayanna Pressley, D-Massachusetts.

The only original squad member to vote yes was Ilhan Omar, D-Minnesota.

The no votes were: 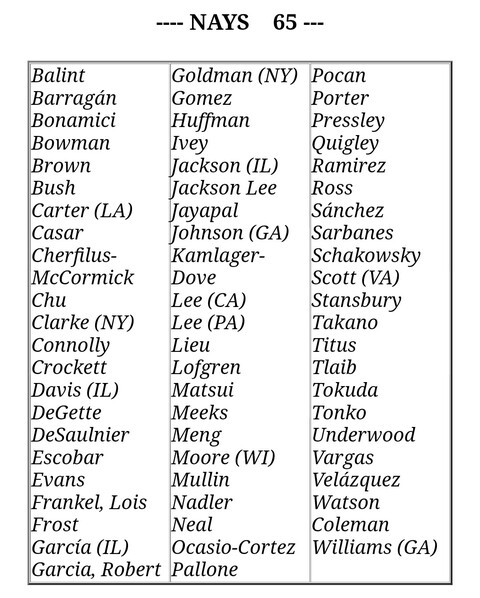