The Wayne County Treasurer auctions off properties that have been foreclosed on for lack of tax payments, and the average sales price of those properties more than doubled between 2009 and 2016.

The average sales price of Detroit properties foreclosed on rose each year between 2009, when it was $2,000, and 2016, when it was $5,000. Even so, the county’s gross proceeds from the auctions have been going down since 2014 as the number of properties sold has been decreasing, a trend that started in 2012. 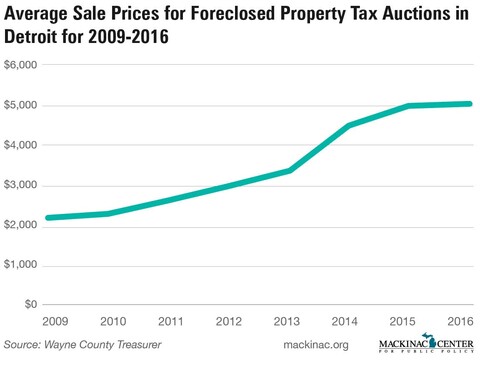 If a property’s owner does not pay the taxes (and fines) due during a three-year period, it is likely that the county will sell it at a public auction.

Jerry Paffendorf, CEO and co-founder of the property data and mapping company Loveland Technologies, believes Wayne County’s delinquent property tax auctions will be worth watching in 2018.

“First, the county and city have been increasing efforts to divert foreclosable properties out of the auction, even removing many properties that haven’t paid any taxes,” Paffendorf said in an email. “Second, there’s a growing recognition that many points of the foreclosure and auction process are unfair, illegal, or counterproductive.”

From 2011 to 2015, one out of every four properties in Detroit entered the foreclosure process due to unpaid property taxes, according to a paper written by Bernadette Atuahene, a professor at Chicago-Kent College of Law, and Timothy Hodge, a professor of economics at Oakland University.

No Lockdown On Taxpayer-Funded Tourism Spending