In 43 states and Washington, D.C., a young person who has a dream of being a forester faces a fairly straightforward process: Get the necessary training and apply for a job. But to be a registered forester in Michigan, it's not so easy.

The state’s occupational code mandates fees and has a higher education requirement. It also places limits on someone with a criminal background. The process includes years of training for an associate or bachelor’s degree, followed by two years of working for someone else and payment of $90 in fees. The law also has a “good moral character” provision, meaning a person’s criminal background can be a barrier to work. (Unlike other state licenses, these requirements only apply to people who refer to themselves as a "registered forester.")

Those obstacles can be overwhelming for many people, and experts say the growth of such protectionist licensure regimes into so many professions has led to fewer opportunities for young people. It some cases, it can even lead to more crime. Research from Stephen Slivinski of Arizona State University links occupational regulations with higher criminal activity.

“Decades of academic literature indicate that gainful employment is one of the best ways to keep ex-prisoners from re-offending and ending up back in prison,” Slivinski said. “So, not surprisingly, occupational licensing barriers that make it harder or impossible for them to reintegrate into the labor force can increase the growth rate in criminal recidivism. In the states that have both high occupational licensing barriers and punitive ‘good character’ provisions, you see a significant increase in the growth rate of re-offenses within three years — an average of over 9 percent growth in the new-crime re-offense rate, which is over three-and-a-half times the national average for the ten-year period studied.”

A new report from the Institute for Justice, a national public interest law firm, analyzes occupational licenses across the 50 states. “License to Work” ranks the states based on how restrictive they are when requiring a government permission slip for people to enter an industry. Today, more than 20 percent of Michigan workers are required to have a license.

According to IJ, Michigan is near the middle of the pack for licensing at number 30 (with one being the most restrictive and 50 being the least). But that’s a heavier burden than the rest of the Midwest. Indiana, Ohio, Illinois, Minnesota, Wisconsin, Pennsylvania and Kentucky all have lower licensing restrictions than Michigan. The IJ review focused on lower-income occupations. 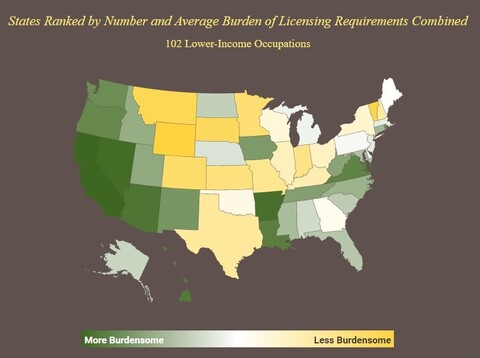 “Occupational licensing limits competition, leading to higher prices and reduced access to jobs,” said Christina Walsh, director of activism and coalitions at IJ. “Reform is desperately needed, and is now being championed by a growing chorus of policymakers and scholars across the political spectrum.”

The state of Michigan requires licenses for hundreds of businesses and occupations. More than 20 percent of workers – one out of every five – must get special government permission in order to hold a job. That’s up from about 5 percent back in the 1950s, and most of the expansion in licensing is for middle- and low-income workers.

Some occupations are licensed in every state and have been for decades. For example, all 50 states license doctors, dentists, barbers, architects, nurses, optometrists, pharmacists and social workers.

But according to a national database of state licensing laws put together by the Goldwater Institute, there are many areas in which Michigan stands nearly alone in requiring a government license to work.

Experts say that licensing has a variety of negative effects. Research has found that it drives up costs for consumers, leads to job loss, exacerbates income inequality, and makes it more likely that ex-convicts return to prison (since it is harder for them to find work). Morris Kleiner of the University of Minnesota has said that in Michigan, licensing rules cost 125,000 jobs and $2,700 per family annually.

Rep. Brandt Iden, a Republican from Oshtemo Township, is the chair of the House Regulatory Reform Committee. His committee has passed several bills that roll back occupational regulations, and he is looking to do more in a comprehensive manner.

“The reality is there are a lot of unnecessary regulations surrounding certain licensure,” Iden said. “I believe it is incumbent upon the Legislature to take a hard look at what is necessary for citizen safety versus what is just burdensome and excess red tape. Therefore, in the coming year, I am committed to reviewing these regulations to try and find a solution which will help grow our economy for all Michigan citizens.”

Editor's Note: This article was updated to make clear that the forester license is an optional registration.