A Coldwater man who owns radio stations in Indiana has commissioned a message on an electronic billboard near Angola, Indiana, to criticize Michigan Gov. Gretchen Whitmer.

One of the billboards states, “Indiana Chamber of Commerce 2020 Business Person of the Year.” It shows a photo of the Michigan governor, with the tagline, “Michigan Gov. Gretchen Whitmer.”

A second billboard states, “Current State of Michigan Business Affairs: Half Full Half Empty.” It then asks “You Decide?”

Steve Swick, president and CEO of Swick Broadcasting in Angola, Indiana, was the person behind the billboards. Swick also owns an appliance store in Coldwater, Michigan.

Speaking of the sign, Swick said, “It’s more satire than anything. Indiana is benefitting greatly from her implemented policies.”

Swick said his billboards will be up for a while.

“They have certainly gotten a lot of response,” he added.

The Indiana Chamber of Commerce wasn’t happy that Swick used its name when taking a shot at an out-of-state politician. A spokeswoman said her the chamber had nothing to do with the billboard and it is erroneous in that the Indiana chamber didn't give any awards to Whitmer.

“We are not in the business of attacking another state. It’s not what we are about,” said Rebecca Patrick, vice president of communications for the Indiana Chamber of Commerce. She said her organization should not be mentioned on the sign.

Patrick said Monday she contacted Swick and he said he removed the Indiana Chamber of Commerce reference from the billboard. 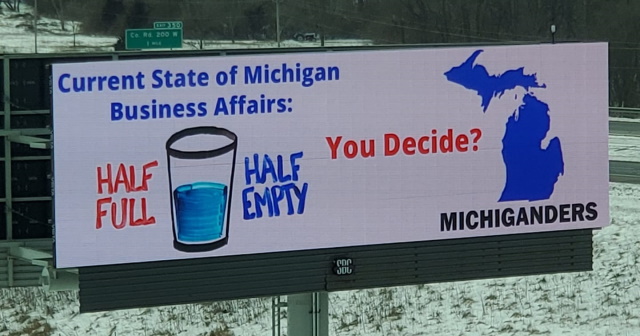