The year 2020 was punishing for countless workers and entrepreneurs in the private sector. More than 1,023,000 workers in Michigan lost their job during a two-month span between February and April. That’s more than one out of every four private sector jobs in the state.

But the hardship was not evenly distributed. As lockdowns and restrictions persisted, there has been a class of people largely exempt from the pain inflicted on workers in restaurants, bars, hotels, health clubs, cosmetology and other businesses shuttered in 2020.

That protected class has been government and public sector workers.

There were 70,088 businesses in Michigan subjected to government-mandated closure at some point in 2020. Yet, many municipal governments gave their employees increases in overall pay. Most received modest pay increases but many received large increases at a time when the taxpayers who pay for them are suffering. The overall pattern contrasts sharply to what happened to the private economy in 2020.

In the coming weeks, this news site will report the raises received by some of the state’s most highly compensated state and municipal employees.

Michigan Capitol Confidential has sent Freedom of Information Act requests to many municipal governments, seeking records showing the gross pay of their employees in 2019 and 2020. The responses so far show a pattern of government workers who suffered no losses during the epidemic, and in many cases, enjoyed extraordinary gains.

The explanations included scheduled raises and promotions to overtime. But they also involved benefits now enjoyed mostly by public sector employees, like being allowed to cash out unused sick days and vacation time.

Steve Guitar, spokesman for the city of Grand Rapids, explained his city’s pay hikes in an email, which is included here in full:

“As a public entity we take great care to be fiscally responsible while also ensuring our employees are appropriately compensated. People are our most valuable resource and, similar to the private sector, investments made towards recruiting and retaining talent are key to our operational success and providing our residents with the best possible value. You’ve already been provided the raw information via a FOIA request but we’re happy to add additional context.”

“Most of the increases you highlight were the result of regularly scheduled wage increases or promotions. A few were adjustments recommended by an external wage study in 2017 that took time to implement. Regardless of the reason, all these adjustments were made before the country was thrust into the grips of the Pandemic and were based on HR industry standards and best practices. Additionally, please note, due to the way you requested this information, this is the total compensation each employee received and therefore may include items such as retirement contributions or reimbursements for authorized expenditures unrelated to their base salary and – depending on the circumstances – are often available to employees across the organization.”

“Additionally, there are factors related to the timing of a hiring or promotion that may make a year-over-year increase appear larger. For instance, you’ll note in the chart below, at least one individual promotion that occurred mid-year and another who started in 2019 and therefore only received a partial salary. In those instances, the salaries appear to have increased substantially from 2019 to 2020 when in actuality the increase merely represents the annualized cost of a full year in that position.”

“Finally, no one has been left unaffected by this pandemic. Cities across the country have worked diligently over the past year to help our communities navigate the impacts of the disease – and Grand Rapids is no different. We’ve implemented a number of protocols and programs – in conjunction with our County, State, and Federal partners – in an effort to keep our residents safe and healthy while also providing some amount of relief to those impacted economically. These are friends, neighbors, co-workers, and family members so, we are acutely aware of the ways in which the pandemic is affecting our communities. We will continue to support those struggling, while mourning those we’ve lost, and focusing on recovery to ensure we come out of this stronger and more resilient than ever.” 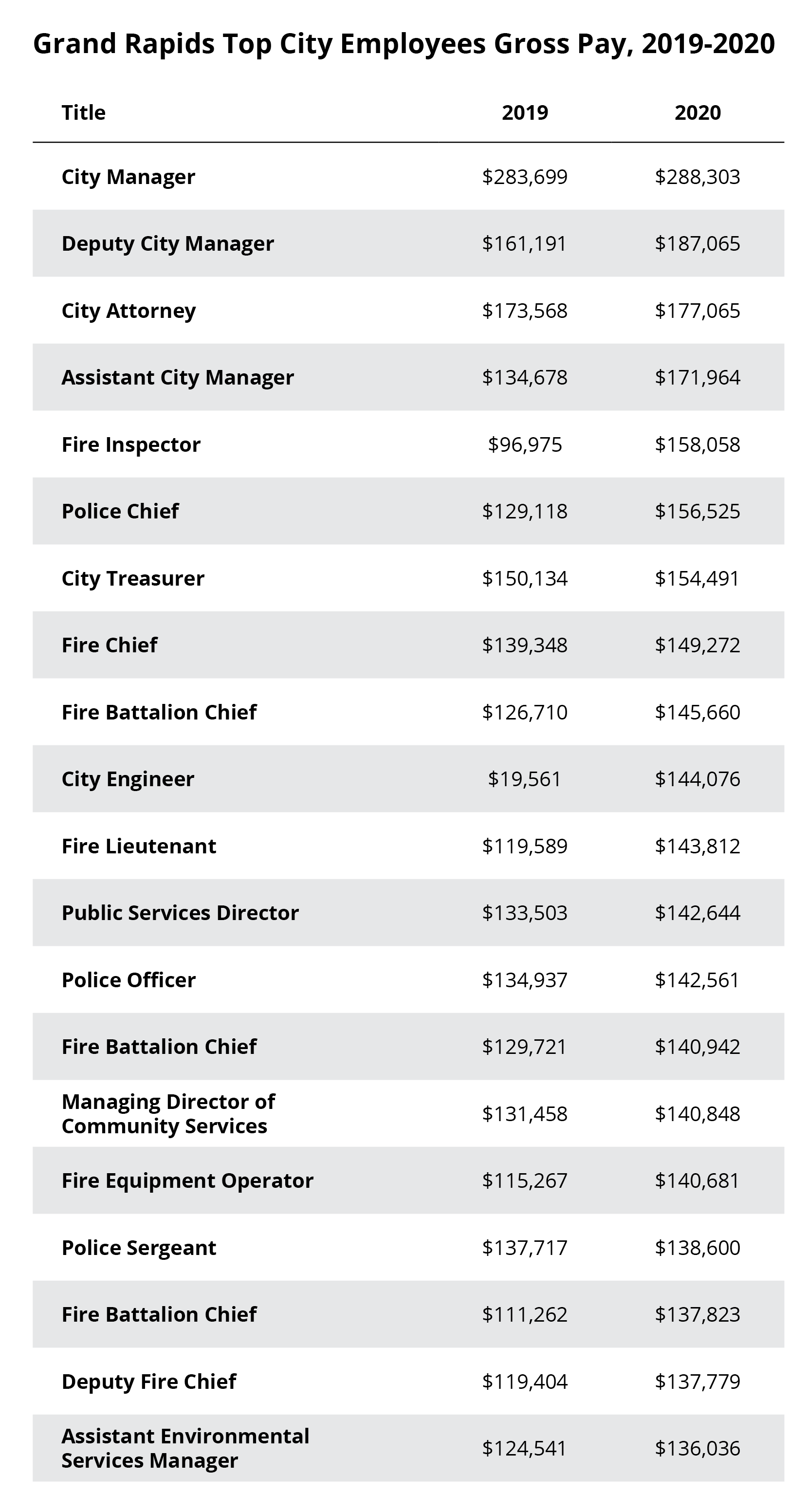