As described here last week, the latest tack of Republican Obamacare “exchange” proponents is to characterize their “MIHealth Marketplace” as a positive good rather than a least-bad option among several bad choices. They are even using labels like “conservative” and “free-market” to describe the entity whose main role will be to administer the billions of dollars of insurance subsidies the federal Patient Protection Act distributes.

The boosters are also trotting out the old canard that the exchange is merely a “Travelocity and Orbitz” for health insurance.

Those claims and labels were badly dented in a recent hearing of the House Health Policy Committee, where staffers from one of the corporations hoping to profit from exchange contracts presented a "Mandated State Exchange Functions" flow-chart: 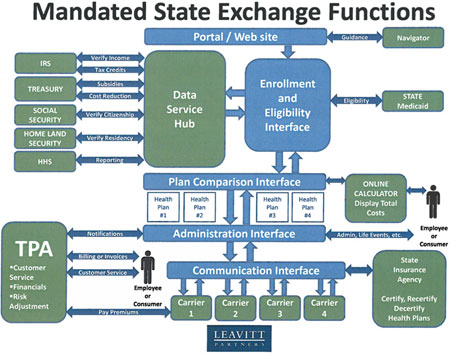 If a health insurance “Travelocity and Orbitz” is all these politicians really want, they’re in luck, because such websites already exist. Better yet, they really are “free-market” services provided by private companies, with no role in administering Obamacare — go to www.ehealthinsurance.com or www.getinsured.com to see examples.

The only reason we’re talking about this now is because of Obamacare’s “gun-to-the-head” mandates. The most compelling priority for many or most Michigan residents is repeal or invalidation of that law - nationally only around 40 percent of the public now supports it, and only 18 percent believe they will be better off under it. Citizens want their representatives and senators to share their compelling repeal priority, and not do anything that undermines it.