Four types of fee increases on Michigan businesses were set to expire last fall, with a total estimated relief of more than $10.7 million for Michigan’s job providers in 2008. "Temporarily" increased by a previous Legislature, the fee increases were given a sunset date of Sept. 30, 2007, at which point the fees were slated to reset to their previous lower level, yielding the aforementioned savings for businesses. But on the sunset date, bills creating five-year extensions of these fees were signed into law by Gov. Jennifer Granholm. The new sunset date for the "temporary" fee increases is Sept. 30, 2012.

The cost of these fee extensions to taxpayers is in addition to the $1.358 billion in tax hikes for 2008 that were signed by the governor on Oct. 1, 2007, to end a government shutdown and balance the fiscal 2008 budget with mostly tax increases (see "Blown Away...," Nov/Dec 2007 Michigan Capitol Confidential.)

Approving extensions of supposedly "temporary" fees is a tool lawmakers are using with growing frequency during the budget process. One "fee," a 7/8ths-cent-per-gallon petroleum levy, has mostly morphed into a tax, with the proceeds dedicated to other state spending. Originally created for and dedicated to a clean-up fund for leaking underground fuel tanks, both the fund and fee had mostly accomplished their goal and outlived their purpose as they approached a Sept. 30, 2004, sunset for the law that had created them.

But unwilling to make cuts to other spending, lawmakers and the governor approved a six-year extension of the sunset for the fuel tank clean-up fee, and its fund, and spent the money on unrelated programs. This fee extension continues to cost Michigan motorists as much as $60 million each year. In 2007, as part of a deal to avoid spending cuts in the rest of the budget that year, another $70 million was raided from the still-active and fee-collecting "storage tank" fund.

The recently enacted extended fee increases on Michigan businesses would do the following:

Because of these four laws, fees on Michigan businesses will be higher than they otherwise would have been by an estimated $10.7 million in 2008. Each bill was approved overwhelmingly in both chambers of the Legislature, with 118 of the 148 lawmakers voting to extend the life on at least $10 million worth of fee increases. However, 15 lawmakers voted in opposition to all four bills. The name of each state lawmaker and the amount of fee increases that they voted to retain is in the box below. 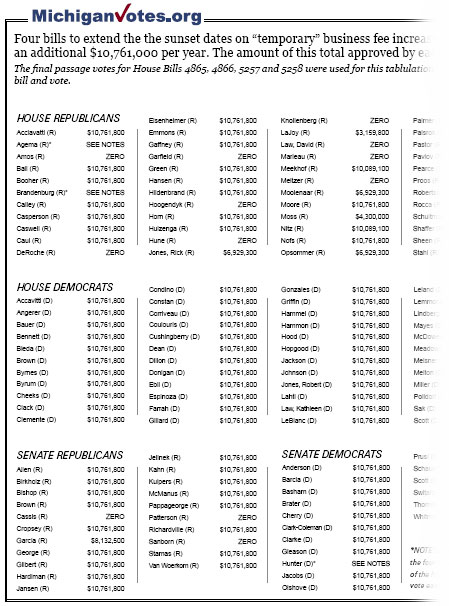