Gov. Gretchen Whitmer’s Tuesday announcement that she would sign the supplemental school aid bill signals the end to a lengthy appropriations debate, finally wrapping up more than two months into the fiscal year. The prolonged drama could easily obscure the final result, which is well within the trend of increased state spending on education.

Even so, Bridge Magazine writers took the opportunity to express their pessimism over the deal. “Education funding for struggling schools? Still lagging the nation,” they wrote. Frankly, that claim cannot be substantiated. The latest report released by the U.S. Census Bureau places Michigan at 22nd in K-12 total revenue for the 2016-17 school year, at $14,132 per pupil, putting our state 1% below the national average three years ago. But it’s far too soon to have any clear sense of how the 2019-20 budget affects Michigan’s standing among other states now.

Nonetheless, the largest revenue source for Michigan public schools, tax dollars collected by the state treasury and budgeted out of Lansing, grew for the 10th straight year. This holds true, even after accounting both for inflation and the steady decline in the number of students enrolled. Based on best estimates, the state’s real per-pupil contribution to public schools this year will end up 15% higher than a decade ago.

Bridge’s lament misses this key point, which also eluded the earlier chorus of overhyped claims that the governor’s initial education funding proposal was “historic” and “game-changing.” As part of a larger budget that depended on a recommended gas tax hike, her proposal called for the second-largest increase to state school aid in the past decade. The version approved by the Republican-led Legislature – providing 99% of the money Whitmer requested – would have ranked fourth-highest in the decade.

Senate Bill 154, the school aid supplemental spending agreement, adds back $70.5 million of the more than $128 million Whitmer removed from the $13.5 billion education funding package with her controversial line-item veto. Reapproving this share of the vetoed funding places this year’s 2.51% increase above the average for the past 10 years. In fact, this year’s increase very nearly matches the largest school aid hike during the Jennifer Granholm administration (the 2007 budget). 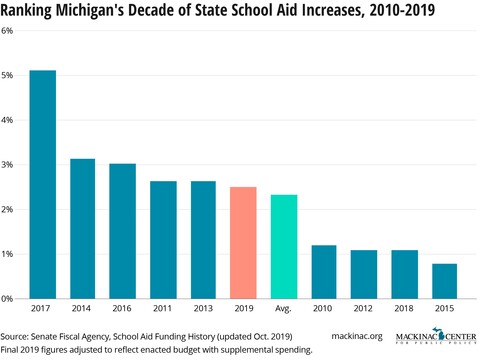 Or to put it another way, the difference between what has been enacted along with the school aid supplemental and the alleged game-changing budget Whitmer proposed early in the year stands at less than $200 million. The state School Aid Fund is already projected to increase nearly twice that amount in the upcoming fiscal year.

The reapproved $70 million makes up a very small share of the state’s school aid budget, but some individual schools will be greatly relieved to see the extra money. The supplemental spending deal means public charter school students once again will receive formula funding on an equal footing with their district peers. Further, a handful of the state’s tiniest remote districts no longer will be targeted with drastic cuts. A timely bill signing from the governor would mean their next payments from the state, scheduled for Dec. 20, could include a holiday gift of some or all of the reapproved funds.

Still, the composition of the final school aid budget represents a promising potential break from the past. Left on the scrap heap were funds for more than 20 different grant programs to finance everything from locally grown produce for school lunches and software tools for local districts to analyze education data to a school employee job bank and equipment for career and technical education programs.

This development sets the stage for the next round of budgeting, now only a few months away. Lawmakers have the opportunity to continue shifting the way they distribute funds, focusing more on student formulas and characteristics, and less on pet political projects. In the meantime, Lansing observers should take a deep breath and refrain from making extreme claims about small changes in the budget.